Preview The quick brown fox jumps over the lazy dog

The Armed Forces Covenant website provides a wealth of information for a range of audiences including information on support and advice, how you can get involved and the latest news and information on events.

On 3 February 2017 Milton Keynes Council was honoured to re-sign their Armed Forces Covenant.

Mark Lancaster MP, Minister for Defence Veterans, Reserves and Personnel, the Mayor and Mayoress and members of the Milton Keynes Armed Forces Liaison group attended the re-signing ceremony at the Civic Offices. By signing the Armed Forces Covenant, Milton Keynes promises that those who serve or have served and their families will be treated fairly in all aspects of life.

The Milton Keynes Armed Forces Liaison Group work together to form an Armed Forces Covenant Action Plan that aims to deliver against key areas including:  health and wellbeing, economy and skills, recognition and remembrance and education, children and young people. 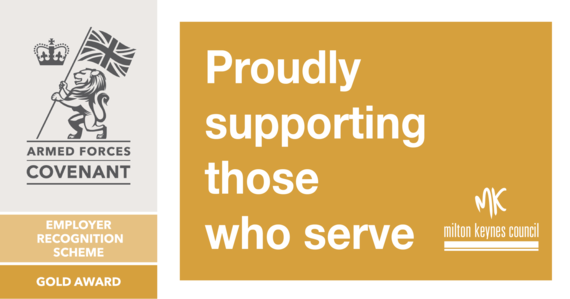 MKC’s support of the Armed Forces Community has been awarded gold status in the Defence Employer Recognition Scheme.  The scheme encourages employers across the country to do more for the armed forces in their area.  MKC signed the Armed Forces Covenant in 2012, and support MK’s service personnel community in many ways, including a guaranteed veteran interview scheme.  We achieved bronze status in 2016 and silver in 2019.  We’re proud of colleagues who are reservists and adult cadet force volunteers.

We value your feedback

Note: You don't have to provide your email address but if you do we can reply if you have a question.

We collect and use information about you so that we can provide you with web based feedback as a Public Duty. Full details about how we use this data and the rights you have around this can be found at www.milton-keynes.gov.uk/privacy. If you have any data protection queries, please contact the Data Protection Officer at data.protection@milton-keynes.gov.uk